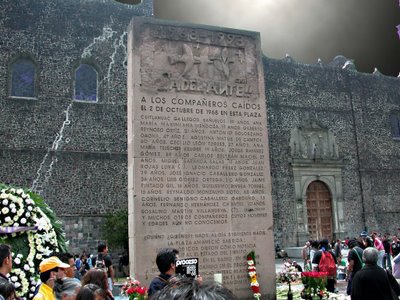 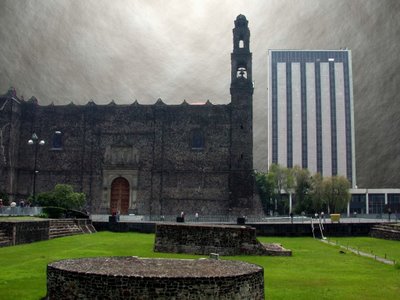 From Wikipedia, the free encyclopedia
Tlatelolco is an area in Mexico City, centered on the Plaza de las Tres Culturas, a square surrounded on three sides by an excavated Aztec pyramid, the 17th century church Templo de Santiago, and the modern office complex of the Mexican foreign ministry.
Originally it was an independent Aztec city, but it was absorbed by Tenochtitlan. During the Aztec rule, it was the market district of the Aztec capital Tenochtitlán, probably one of the largest in the Americas.

According to Conquistador Bernal Díaz del Castillo, it was larger than the city of Sevilla and larger than any market any of the Spaniards had seen, even those of Venice and Constantinople, with about 20,000 to 40,000 people trading.
Tlatelolco massacre

From Wikipedia, the free encyclopedia.

http://en.wikipedia.org/wiki/Tlatelolco_massacre
The Tlatelolco Massacre, also known as The Night of Tlatelolco (from a book title by the Mexican writer Elena Poniatowska), took place on the afternoon and night of October 2, 1968, in the Plaza de las Tres Culturas in the Tlatelolco section of Mexico City, ten days before the 1968 Summer Olympics celebrations in Mexico City. The death toll remains controversial: some estimates place the number of deaths in the thousands, but most sources report 200-300 deaths. Government sources say "4 Dead, 20 Wounded". There exact number of people who were arrested is also controversial.