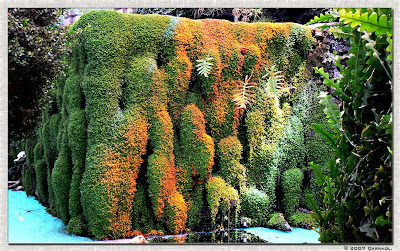 The botanical garden in Toluca is notable as much for its flora as for the magnificent art noveau building in which it is housed. Completed in 1910 as part of Mexico's centennial celebrations, the former City of Toluca Market boasts 5,000 square meters of space holding 400 plant species within its walls. And the walls themselves are spectacular, comprised in part of 3,000 square meters of stained glass. The market itself, located right downtown on a large plaza below the state Congress and the Cathedral, was closed in 1975 and five years later the building was rededicated as the Cosmovitral-Jardin Botanico. The stained glass, finished in 1990 by Leopoldo Flores Valdes, includes 28 different colors of glass and is considered one of the largest artworks in the world. In the glass, Flores Valdes sought to depict his interpretation of time, movement and the contradictory phenomena taking place in matter, from a cosmogonic perception.
Posted by Carraol at Monday, February 19, 2007