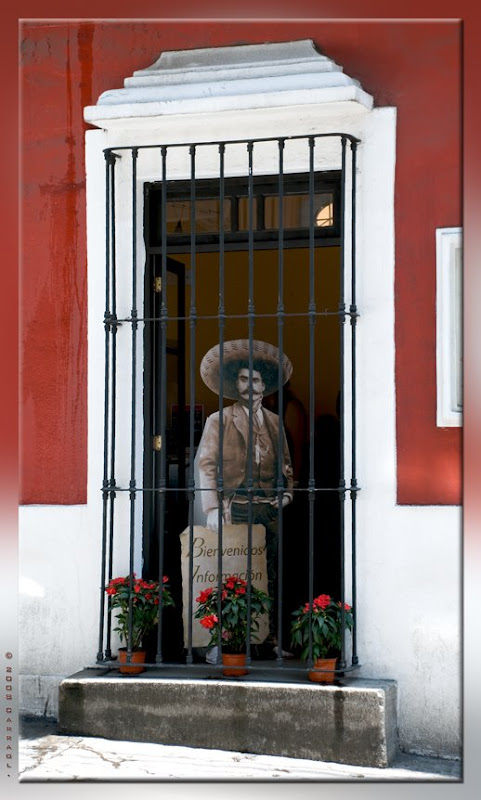 Cuernavaca Tourism Office. The figure in the balcony is Emiliano Zapata (August 8, 1879–April 10, 1919) was a leading figure in the Mexican Revolution, which broke out in 1910, and which was initially directed against the president Porfirio Díaz. He formed and commanded an important revolutionary force, the Liberation Army of the South.

At that time, Mexico was ruled by a dictatorship under Porfirio Díaz, who had seized power in 1876. The social system of the time was a sort of proto-capitalist feudal system, with large landed estates (haciendas) controlling more and more of the land and squeezing out the independent communities of the indigenous and mestizos, who were then subsequently forced into debt slavery (peonaje) on the haciendas. Díaz ran local elections to pacify the people and run a government that they could argue was self-imposed. Under Díaz, close confidantes and associates were given offices in districts throughout Mexico. These offices became the enforcers of "land reforms" that actually concentrated the haciendas into fewer hands. [Any similarity with actuality?]

I have heard of this man and think I saw a movie about him not that long ago. I like your photography of him in the doorway. Sort of like they got him in jail.

The vivid colour of the wall frames the doorway beautifully. Thanks for the history lesson; I hope lots of people already know this part of Mexcan history!