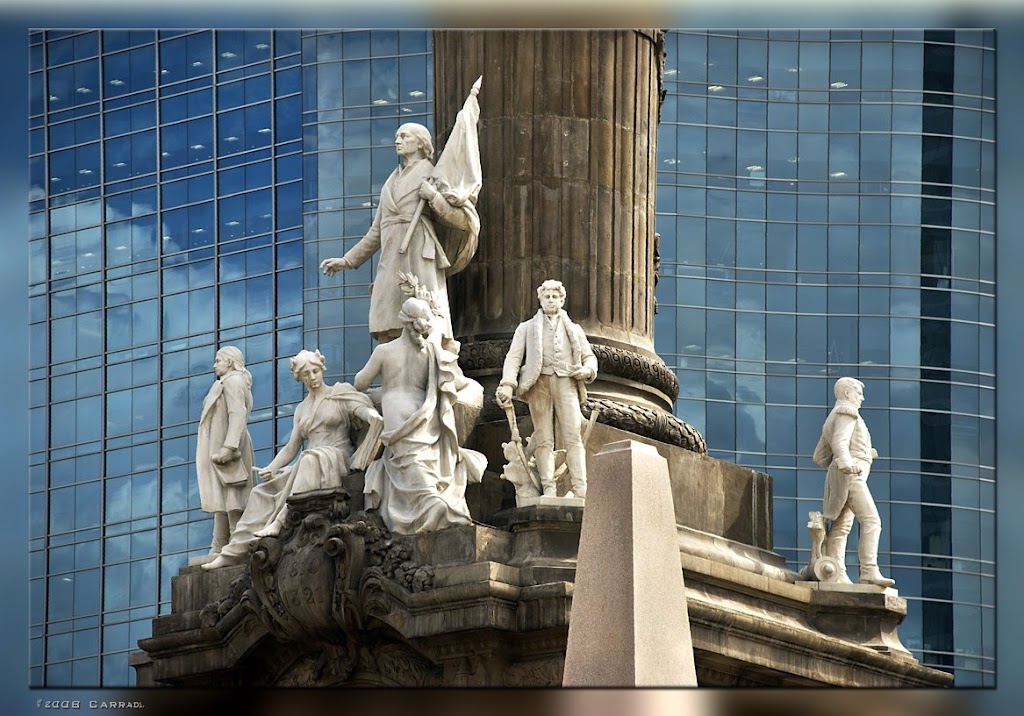 El Ángel de la Independencia ("The Angel of Independence") and officially known as Columna de la Independencia, is a victory column located on a roundabout over Paseo de la Reforma in downtown, was built to commemorate the centennial of the beginning of Mexico's War of Independence, celebrated in 1910. It is one of the most recognizable landmarks in Mexico City, it bears a resemblance to the Victory Column in Berlin. Next to the column there is a group of marble statues of some of the heroes of the War of Independence, from left to right:
Jose Maria Morelos y Pavon, Miguel Hidalgo y Costilla, Vicente Guerrero y Francisco Javier Mina. The women sculptures are History and Patria (Homeland).

Hero: “a person noted for feats of courage or nobility of purpose, especially one who has risked or sacrificed his or her life”

Exists heroes in our days?

Thanks for the explanation. It's been too long since I've been in Mexico City and I guess I should return to check out some of the places you have highlighted. Heroes? Yes, of course; I have to believe this or I would despair, esp at the state of our planet. Some that I can readily identify area humanitarian workers who risk their lives to help people in war-torn countries, health care workers who assist people with communicable diseases, educators who work with disadvantaged children, fire-fighters and police who work in dangerous places. Need anymore? :o)

I like the contrast between the column and the glas building behind.
The column looks so big, really impressing!

Beautiful contrast between past and present. Bravo!

Chana, Kate, Blacksun, Snapper, thank you very much for stopping by.
Kate, those heroes are great, I'm refer to epic ones, heroes whom transforms the life of their countries.

I like the juxtapositioning of the traditional statue in front of the modern build. Nice one...

Mark, thanks for stopping by.