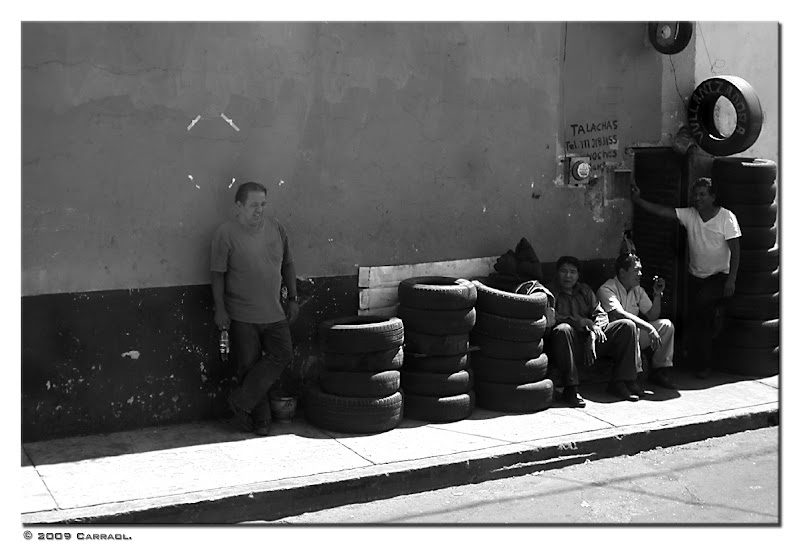 "Taken a few hours ago in Cuernavaca, it looks from the Mexico of 1940, not change that all"
“The basic law of capitalism is you or I, not both you and I”
Karl Liebknecht.

Remember the good old days, when we used to talk about the “subprime crisis” — and some even thought that this crisis could be “contained”? Oh, the nostalgia!

Today we know that subprime lending was only a small fraction of the problem. Even bad home loans in general were only part of what went wrong. We’re living in a world of troubled borrowers, ranging from shopping mall developers to European “miracle” economies. And new kinds of debt trouble just keep emerging.

How did this global debt crisis happen? Why is it so widespread? The answer, I’d suggest, can be found in a speech Ben Bernanke, the Federal Reserve chairman, gave four years ago. At the time, Mr. Bernanke was trying to be reassuring. But what he said then nonetheless foreshadowed the bust to come.

The speech, titled “The Global Saving Glut and the U.S. Current Account Deficit,” offered a novel explanation for the rapid rise of the U.S. trade deficit in the early 21st century. The causes, argued Mr. Bernanke, lay not in America but in Asia.

In the mid-1990s, he pointed out, the emerging economies of Asia had been major importers of capital, borrowing abroad to finance their development. But after the Asian financial crisis of 1997-98 (which seemed like a big deal at the time but looks trivial compared with what’s happening now), these countries began protecting themselves by amassing huge war chests of foreign assets, in effect exporting capital to the rest of the world.

The result was a world awash in cheap money, looking for somewhere to go.

Most of that money went to the United States — hence our giant trade deficit, because a trade deficit is the flip side of capital inflows. But as Mr. Bernanke correctly pointed out, money surged into other nations as well. In particular, a number of smaller European economies experienced capital inflows that, while much smaller in dollar terms than the flows into the United States, were much larger compared with the size of their economies.

Still, much of the global saving glut did end up in America. Why?

Mr. Bernanke cited “the depth and sophistication of the country’s financial markets (which, among other things, have allowed households easy access to housing wealth).” Depth, yes. But sophistication? Well, you could say that American bankers, empowered by a quarter-century of deregulatory zeal, led the world in finding sophisticated ways to enrich themselves by hiding risk and fooling investors.

And wide-open, loosely regulated financial systems characterized many of the other recipients of large capital inflows. This may explain the almost eerie correlation between conservative praise two or three years ago and economic disaster today. “Reforms have made Iceland a Nordic tiger,” declared a paper from the Cato Institute. “How Ireland Became the Celtic Tiger” was the title of one Heritage Foundation article; “The Estonian Economic Miracle” was the title of another. All three nations are in deep crisis now.

For a while, the inrush of capital created the illusion of wealth in these countries, just as it did for American homeowners: asset prices were rising, currencies were strong, and everything looked fine. But bubbles always burst sooner or later, and yesterday’s miracle economies have become today’s basket cases, nations whose assets have evaporated but whose debts remain all too real. And these debts are an especially heavy burden because most of the loans were denominated in other countries’ currencies.

Nor is the damage confined to the original borrowers. In America, the housing bubble mainly took place along the coasts, but when the bubble burst, demand for manufactured goods, especially cars, collapsed — and that has taken a terrible toll on the industrial heartland. Similarly, Europe’s bubbles were mainly around the continent’s periphery, yet industrial production in Germany — which never had a financial bubble but is Europe’s manufacturing core — is falling rapidly, thanks to a plunge in exports.

If you want to know where the global crisis came from, then, think of it this way: we’re looking at the revenge of the glut.

And the saving glut is still out there. In fact, it’s bigger than ever, now that suddenly impoverished consumers have rediscovered the virtues of thrift and the worldwide property boom, which provided an outlet for all those excess savings, has turned into a worldwide bust.

One way to look at the international situation right now is that we’re suffering from a global paradox of thrift: around the world, desired saving exceeds the amount businesses are willing to invest. And the result is a global slump that leaves everyone worse off.

So that’s how we got into this mess. And we’re still looking for the way out.

Love the quote and the b&w photo too.

Carrol: We love Mexico and you are a fabulous photographer, so naturally we love your blog! Thanks for stopping by and visiting the "glass pears."

This is a fascinating post and the image is so evocative.

JM, Greensboro, Babooshka, thanks a lot for your comments.