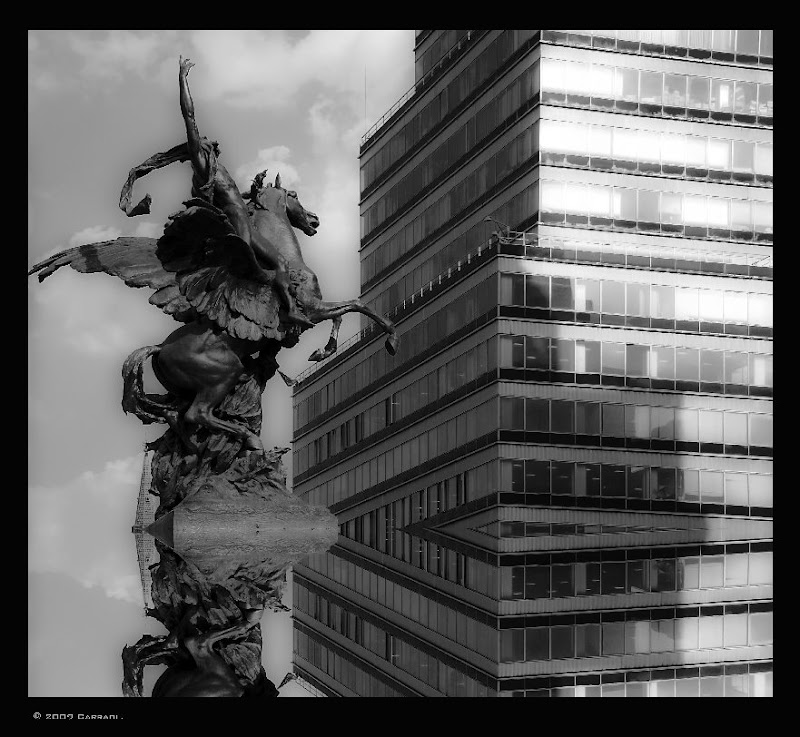 The Torre Latinoamericana (literally, "Latin American Tower") is a building in downtown Mexico City. Its central location, height (183 m or 597 ft; 45 stories), and history make it one of Mexico City's most important landmarks. It was also the city's tallest building from 1956, when it was built, until the 1984 completion of the Torre Ejecutiva Pemex, which is 22 m higher (although, if one subtracts the height of the TV antenna atop the Torre Latinoamericana, it was surpassed in 1972 by the 207m high Hotel de México, which was subsequently remodelled and turned into the World Trade Center Mexico).
music+image

What an amazing building and how fabulous to show it in juxtaposition with the sculpture. Bravo!

This is indeed an exceptional photo with the statue. I like it and the amount of glass exposed is extraordinary.

What a powerful image you've create ed. I would have guessed that building was from the 60s or 70s. The reflection and the fluid, tense statue alongside all that linear graphic architecture is just spectacular. You are still one of my top 5 fave photographers on CDPBlogs. I wish more of our group would visit your site. Your work is inspirational.
-Kim
Seattle Daily Photo

This is an amazing shot! Good show!

Publishing in Black and White adds to the power of this great GLASS photo. Mexico City is a photographer's dream, running the spectrum from the neon colorful to the earthy ochre to black and white. Please keep the photos coming!

the building and statue is so artistic in your photo. truly gorgeous. well done for theme day

Outstanding image and monochrome such a perfect choice.

Amazing. How do we know you didn't post it upsidedown?

This is definitely the most dramatic of all the theme day entries. It's just wonderful.

Beautiful photo, the black and white especially accentuates the glass.

Thank you very much for your visits and kind words.