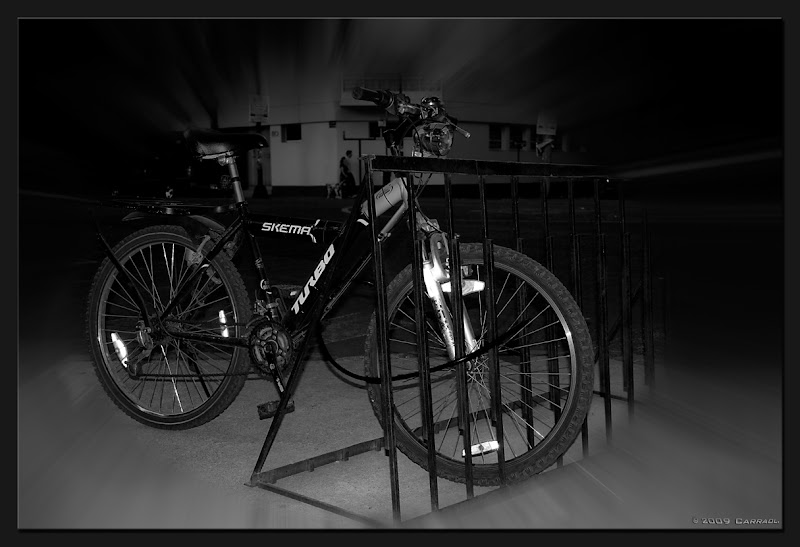 Bicycles
I took to calling my bike my friend, I carried on silent conversations with it. And of course I paid it the best attention. Which meant that every time I returned home I stood the bike upside down, searched for a clean rag and polished the hubs and the spokes. Then I cleaned the chain and greased it afresh. That operation left ugly stains on the stone in the walkway. My mother would complain, beg me to put a newspaper under my wheel before starting to clean it. Sometimes she would get so incensed that she would say to me in full sarcasm, 'I'm surprised you don't take that thing to bed with you!' And I would retort -- 'I would if I had a decent room and a big enough bed.

After a time, habituated to spending so many hours a day on my bike, I became less and less interested in my friends. My wheel had now become my one and only friend. I could relay on it, which is more than I could say about my buddies. It's too bad no one ever photographed me with my friend. I would give anything now to know what we looked like.

I took care of my wheel as one would look after a Rolls Royce. If it needed repairs I always brought it to the same shop on Myrtle Avenue run by a named Ed Perry. He handled the bike with kid gloves, you might say. He would always see to it that neither front nor back wheel wobbled. Often he would do a job for me without pay, because, as he put it, he never saw a man so in love with his bike as I was.

Often I was in the saddle, so to speak, from morning till evening. I rode everywhere and usually at a good clip. Some days, I encountered some of the six-day riders at the fountain in Prospect Park. They would permit me to set the pace for them along the smooth path that led from the Park to Coney Island.

From The Quotable Cyclist. My Bike and other Friends by Henry Miller.

Excellent image. Looks as if the bike is floating. And the passage you selected is marvelous; recalls Zen and the Art of Motorcycle Maintenance!