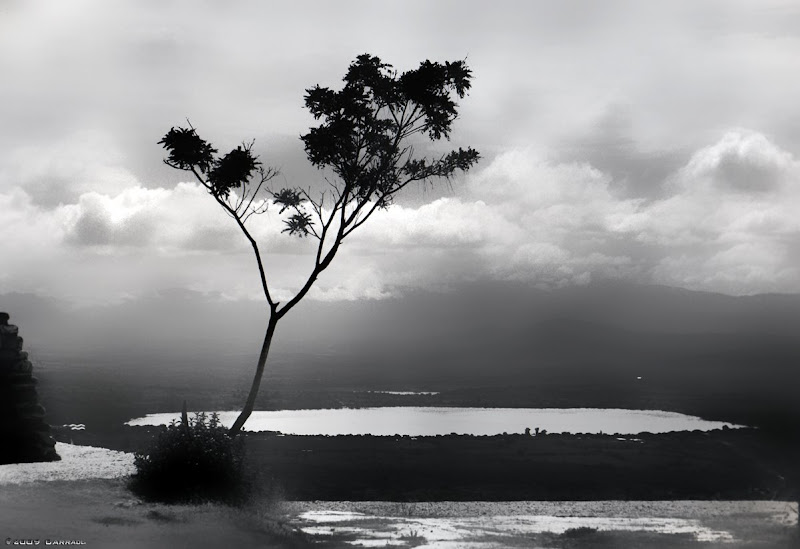 A view of El Rodeo Lagoon from Xochicalco.
Xochicalco ("sho-chee-cal-co") is a pre-Columbian archaeological site in the western part of the Mexican state of Morelos. The name Xochicalco may be translated from Nahuatl as "in the (place of the) house of Flowers". The site is located 38 km southwest of Cuernavaca, about 76 miles by road from Mexico City. The site is open to visitors all week, from 10am to 5pm, although access to the observatory is only allowed after noon. The apogee of Xochicalco came after the fall of Teotihuacan and it has been speculated that Xochicalco may have played a part in the fall of the Teotihuacan empire. It has been speculated that Xochicalco may have had a community of artists from other parts of Mesoamerica.

The architecture and iconography of Xochicalco show affinities with Teotihuacan, the Maya area, and the Matlatzinca culture of the Toluca Valley. Today some residents of the nearby village of Cuentepec speak Nahuatl.

The main ceremonial center is atop an artificially leveled hill, with remains of residential structures, mostly unexcavated, on long terraces covering the slopes. The site was first occupied by 200 BC, but did not develop into an urban center until the Epiclassic period (A.D. 700 - 900). Nearly all the standing architecture at the site was built at this time. At its peak, the city may have had a population of up to 20,000 people. [Wiki]

What a view! And interesting to hear about Xochicalco. Even though I thought I had some knowledge about Pre-Columbian history this one is new to me. Great post.

I don't get around to posting many comments - I sometimes wonder how I find the time to get my own posts up - but I want to tell you how much I admire your work. It's always creative, always fresh. This picture is a knockout, combining beautiful light and space.

Thanks for sharing this nice B&w shot.

This is a nice black and white photograph. I like it a lot.

Thanks for the comment on my Celtic totem pole.

You are welcome for the link. The photos in this blog are good photography, very varied and capture your subject well. I look forward to getting to know Mexico City better through your camera lens.