The Birdmen of Mexico II 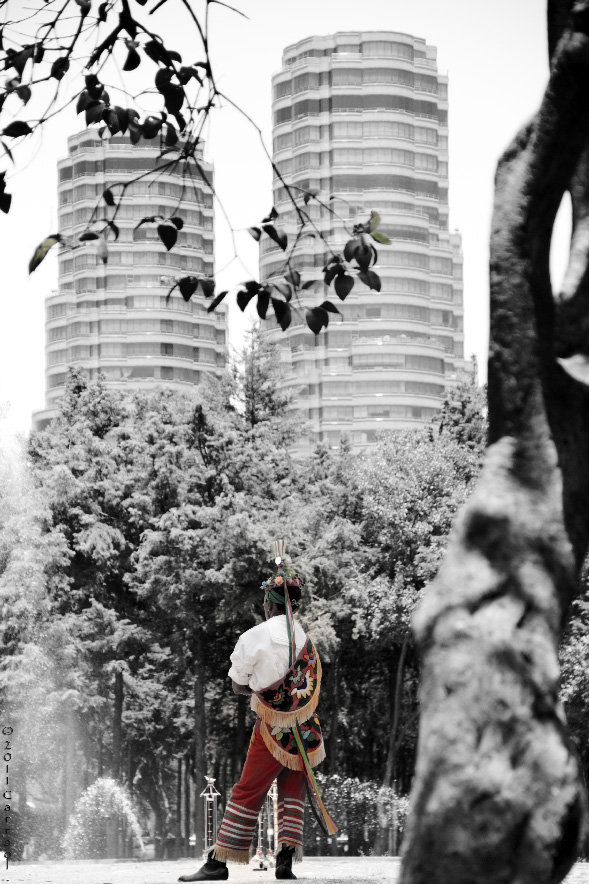 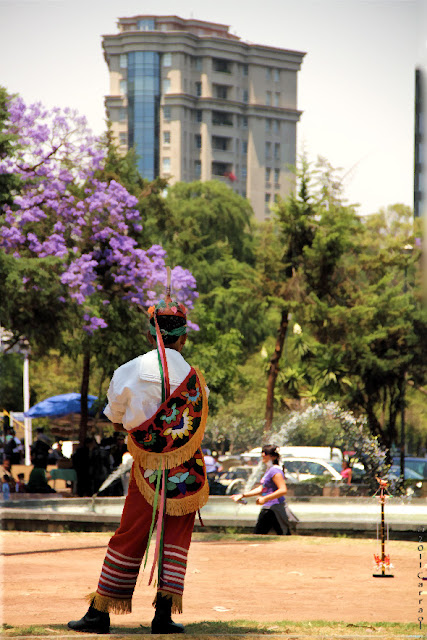 You can see flying scenes in :
Papantla Flyers
and
Swing of Delight
and
Swing of Delight II
and
Swing of Delight III
The Birdmans of Mexico
The Voladores of Papantla
Ask anyone who's been to Papantla what most impressed them, and they'll probably say, "The Voladores." Many people who've never been to the Gulf Coast -- or even to Mexico - will light up in recognition at the mention of the Voladores. They perform regularly throughout Mexico, Central and South America. They've performed in several cities in the United States, and even in Paris and Madrid. So, who are the Voladores, and why are they famous?
Volador means flyer - he who flies. It is breathtaking to watch the spectacle of four men gracefully "flying" upside down from a 75 foot  pole secured only by a rope tied around their waists.
Even more amazing is the musician, called the caporal. Balanced on a narrow wooden platform without a rope or safety net, the caporal plays a drum and flute and invokes an ancient spiritual offering in the form of a spectacular dance.
As he turns to face the four cardinal directions, he will bend his head back to his feet, balance on one foot then lean precariously forward, and perform intricate footwork, all the time playing the flute and drum! No matter how many times you see this beautiful performance, it will continue to astonish you, and the plaintive tune of the flute and drum will remain with you long after you have returned home.
The early history of the ceremonial flight of the Voladores is shrouded in the mists of antiquity. Information about the original ritual was partially lost when the invading conquerors from Spain destroyed so many of the documents and codices of the indigenous cultures. Fortunately, enough survived through legend and oral history and in materials written by early visitors to New Spain, that anthropologists and historians have been able to document at least part of the story of this ancient religious practice and how it has evolved through time.
A Totonaca myth tells of a time when there was a great drought, and food and water grew scarce throughout the land. Five young men decided that they must send a message to Xipe Totec, God of fertility so that the rains would return and nurture the soil, and their crops would again flourish. So they went into the forest and searched for the tallest, straightest tree they could find.
When they came upon the perfect tree, they stayed with it overnight, fasting and praying for the tree's spirit to help them in their quest. The next day they blessed the tree, then felled it and carried it back to their village, never allowing it to touch the ground. Only when they decided upon the perfect location for their ritual, did they set the tree down.
The men stripped the tree of its leaves and branches, dug a hole to stand it upright, then blessed the site with ritual offerings. The men adorned their bodies with feathers so that they would appear like birds to Xipe Totec, in hope of attracting the god's attention to their important request. With vines wrapped around their waists, they secured themselves to the pole and made their plea through their flight and the haunting sound of the flute and drum.
Voladores de Papantla.com
music+image
Thanks for visiting, please be sure that I read each and every one of your kind comments, I appreciate them all. Stay tuned.
Posted by Carraol at Tuesday, April 05, 2011

each of these has its own power. each tells a remarkably different story. fascinating.